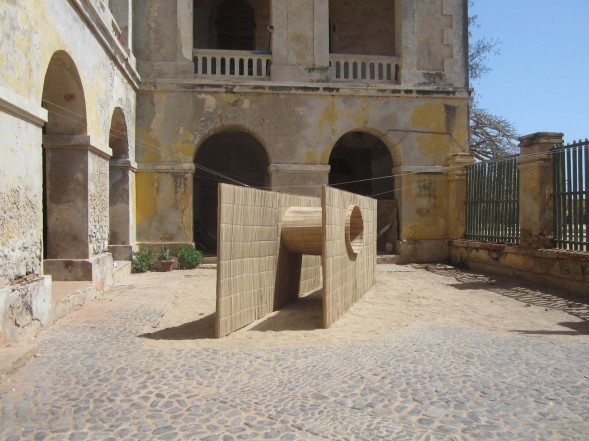 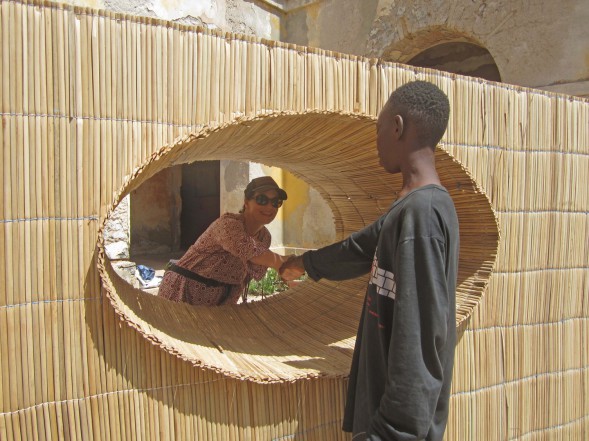 Using the example of archaic societies, the ethnologist Marcel Mauss showed that the complex process of giving and taking was the foundation of something like social life and society. Accepting a gift creates a relationship, a bond. With the emergence of the capitalist economic system, according to Mauss, the original cohesion of societies disappeared, since only profit orientation and profit became the goal of trade. The gift was replaced by goods, man became homo oeconomicus. In the famous Essai sur le Don of 1924, Mauss projected a society built on generosity and mutual solidarity.

With reference to Mauss, the group of convivialists was formed in 2014, an association of around 40 French-speaking scientists and intellectuals. In view of the current global crises such as the climate catastrophe, species extinction, finite resources, growing social inequalities, increasing wars and an ever more unleashed capital market, they have published a manifesto that speaks of conversion and a positive vision of living together: the convivialist manifesto.

In her eyes, the root of the current crisis lies in the structural excessiveness of modernist productivism:

“There is as yet no clear relationship between wealth, materially and financially speaking, on the one hand, and happiness and well-being on the other. Ecologically, the condition of the planet makes it necessary to strive for all forms of non-growth wealth. (...) Humans can no longer regard themselves as owners and lords of nature. Far from opposing her, they are part of her and they must, metaphorically at least, find their way back into a gift-giving relationship with her.”

They call for a fight against excess, i.e. against extreme poverty and extreme wealth, a post-growth economy and maximum pluralism and recognition between people.

2021 in collaboration with Thomas Huber (GÆG)

on top of a factory wall in Jesenik/ Czech Republic 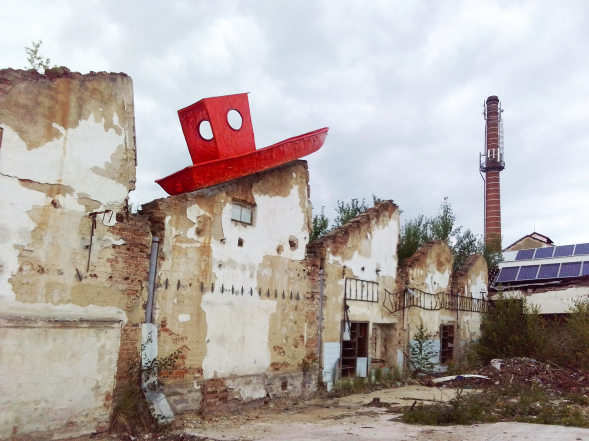 installation refering to the covid19 pandemia, 2020

consisting in 5 (or more) skirt-carcasses made of folding rules 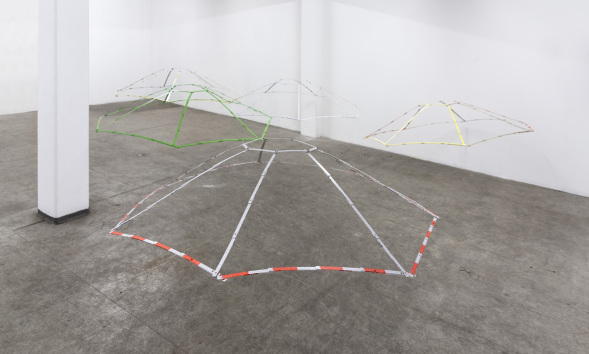 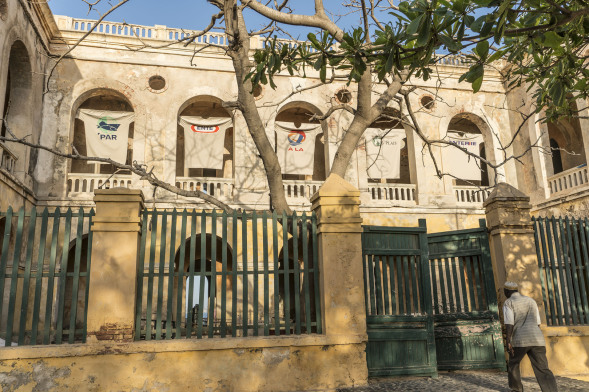 The installation consists in a series of T-shirts with imprints of modified logos of 5 representatively chosen concerns, who exploit West Africa and exemplarily stand for repressive neocolonialism. The names of the companies are replaced in the logos by individual syllables of the term “joke-relationship”. In West Africa this humorous kind of elocution is deemed as a universal codex and as well as a mechanism to arbitrate, to coexist peacefully across boundaries of clans or religions, but also between individuals. Applied on the relationship of West Africans to such companies, the term evolves scathing sarcasm, which also reflects on the history of the exhibition space Relais de l’Espadon on the Île de Gorée. 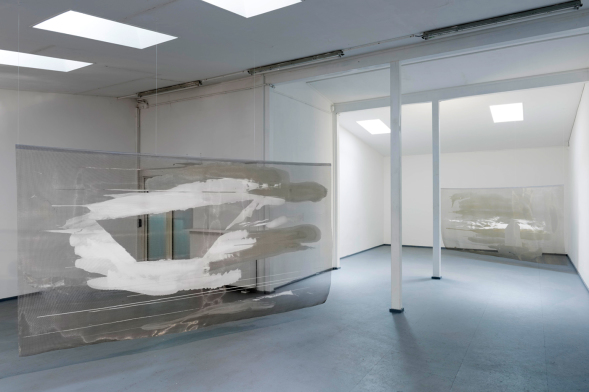 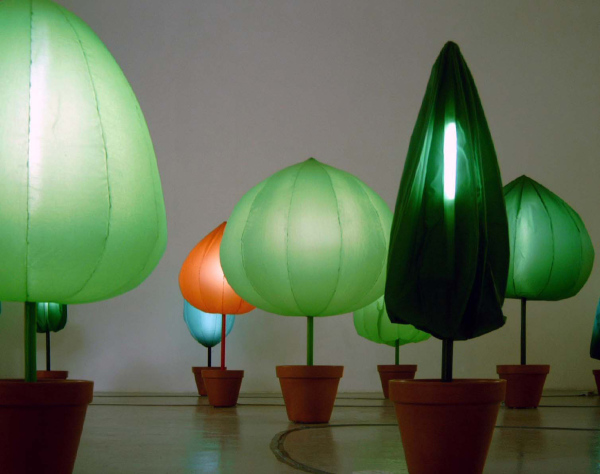 The artists point out an ironic perception of interaction with Nature. An artificial created forest represented as a nostalgic scheme of yearning.

Ensould trees - each of them get revived by a continuous air blowing ventilation-system, till blown up to its basic sublime perfect form, to be transformed by vacu­uming slowly, into a blank, sleeping object. A perpetual cycle. 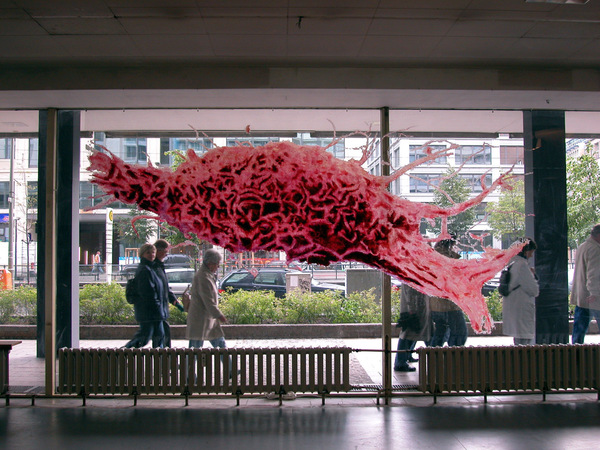 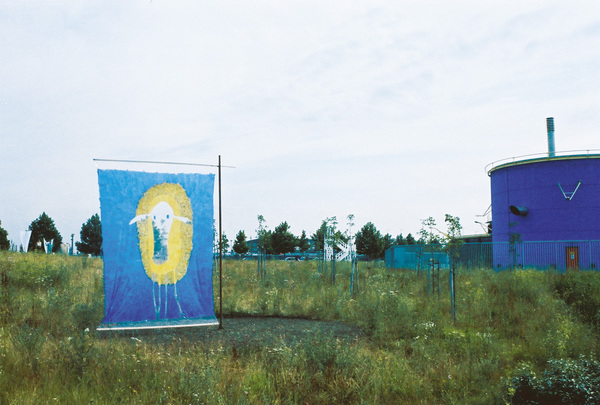 not realized, top-placed design (of coequal 4) in the open, aborted competition 2009 for the memorial of liberty and unity in Berlin 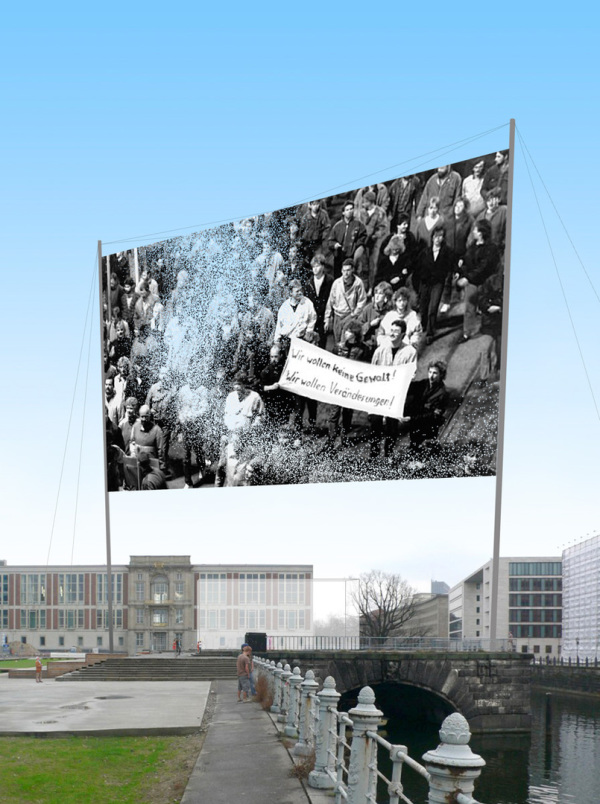 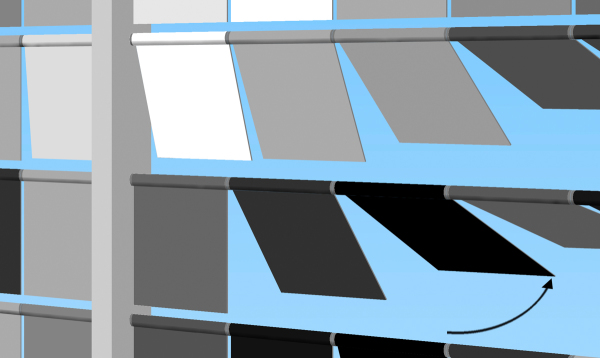 An authentic photograph of the decisive demonstration 1989 in Leipzig (not in Berlin!) is presented on the shape of a demonstration banner in over-size.

The image presents itself as instable and capricious as the equivalence in duration of liberty and unity by being dissolved in movable pixels, eluding wind pressure.

A cooperative between a western artist and an eastern photographer was proposed – one of few East German photographers who on pain of penalties has documented this first demonstrations in Leipzig. These photographs were made in black and white, as they had to be developed secretly at home.

The chosen image shows faces of this courageous people in the first large demonstration, when hesitantly the first banners were held up.

For the following, nominated tender, the artist was not invited. A striking design of naive symbolism has won the competition by a politically well-connected architect who first of all sacked the cooperating artist as soon as the competition was won. The design contains the slogan “we are one people”, the propagandistic transfiguration of West Germany of the original “we are the people”.