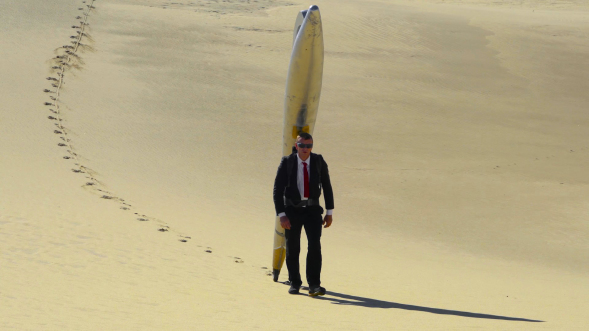 With an oversize pen, the artists have drawn a rectangle over 600 km across Utah, Wyoming and Colorado.

On the website www.linear2017.org the performance was documented in real-time and only there the line manifested as a visible graphic.

The resulting video work comes in the look of a video game about a man, dragging an enormous pen along an imagined straight line, resisting against antagonists from a fictitious, violent state agency.

performance at the Edinburgh International Art Festival at August 13th 2016 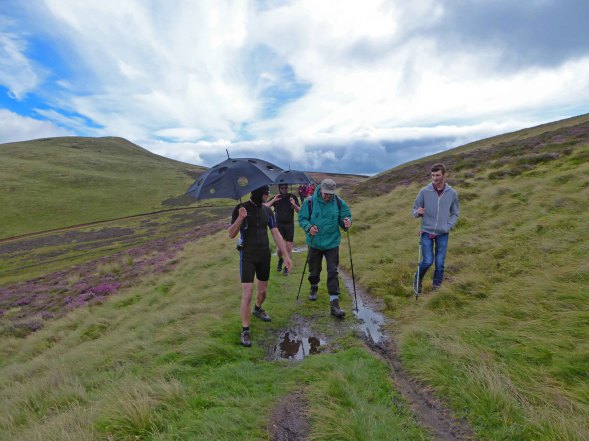 The two protagonists are wearing wetsuits and carrying perforated umbrellas.

They might be considered as some of these crazy neighbours or creative activists, extreme athletes or could be artists – do they have something to say? Are they protesting about a certain purpose?

The artists are greeting everybody coming along and are open to conversation. 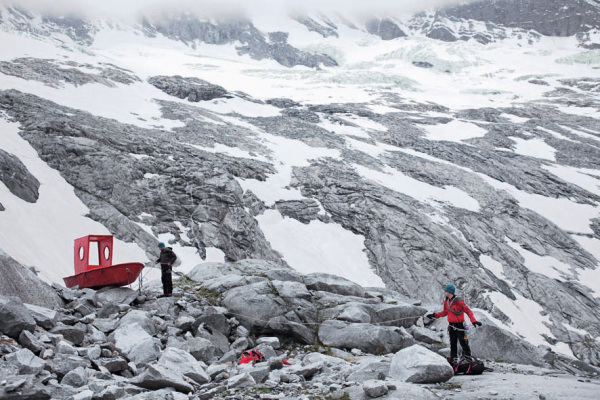 The undertaking is driven by hope: bare handed the artists drag a self-made boat over the Alps. Neo-romantic aspirations and sisyphean exertion characterize the mission, whose apparent aim is to launch the boat into the lagoon in time for the most distin­guished art event in the world, the Venice Biennale. During the launch at Campo SS. Apostoli, tragically the boat sank.

This route is arduous and physically and mentally demands a great deal even from the experienced mountaineers.

The major part of the three-week expedition consists in traversing the main divide of the Alps on foot.

The work officially became a collateral event of the Venice Biennale and for it to be documented there by means simultaneously of the daily journals entries of the expe­dition in written and illustrated form.

A series of photographs was generated as well as a video work, which were presented with the retrieved boat.

in collaboration with Volker Flamm 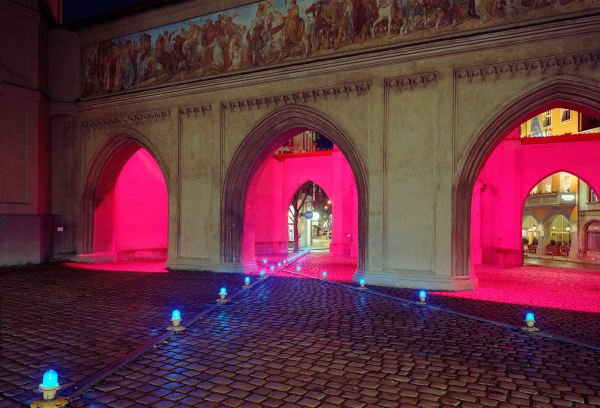 The site of the medieval city gate provoked a political work: as a former boundary between inside and outside, poor and rich, unfree and free, the building became temporarily a metaphor for current immigration politics as a result of the artistic intervention.

An aesthetic picture was created, that anticipates the complexity of the theme.

The ironical enacted welcome tips in its entirety into the monstrosity of a maharaja palace. This ambivalence transfigures the increased permeability of the gate as well as the opulent heartiness of the gesture of welcome.

powerwalk – going for a charge 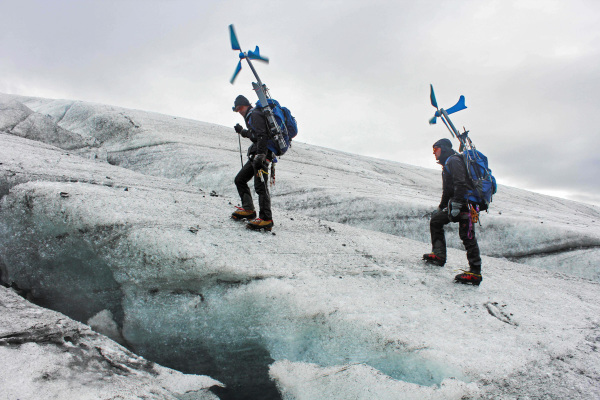 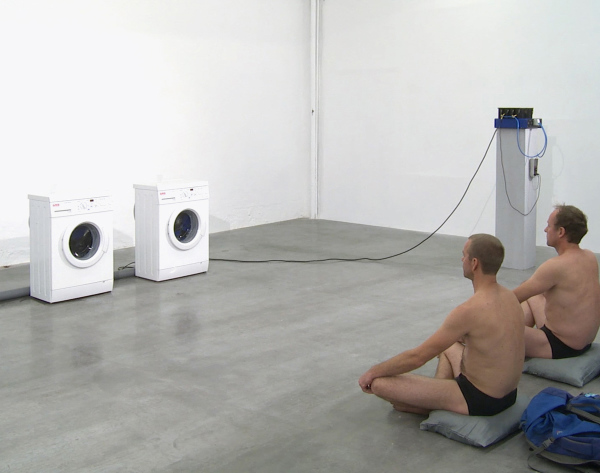 For powerwalk the two artists walked in the course of a 10-day expedition on Europe’s largest glacier, the Icelandic Vatnajökull as human power stations.
During their undertaking in September 2013 they carried mobile wind generators, producing permanently electricity. In this process generated wind energy has been accumulated in special batteries, which serves the artistic gain of the undertaking.

The exploitation of energy and its consumption, staged in this project in two separate paces, evolves a strongly metaphorical quality. It evolves an exaggerated image to the energy-politically disputed concept of decentralized production of energy, which is favored not only at the scientific side.

In the work of art the artists ironize the current race for resources and energies between the industrial countries and a society orientated towards efficiency, profit and entertainment.

The performance, documented cinematically and photographically, has been formatted installation based for exhibitions.

installation for the millennium celebration of the city of Munich, 1999/2000

at Ludwigstraße and in St. Paul’s Church 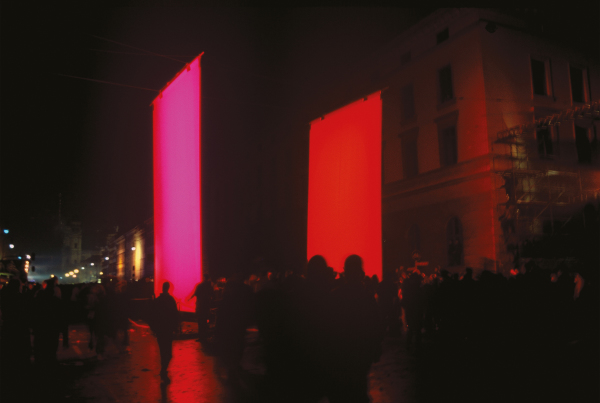 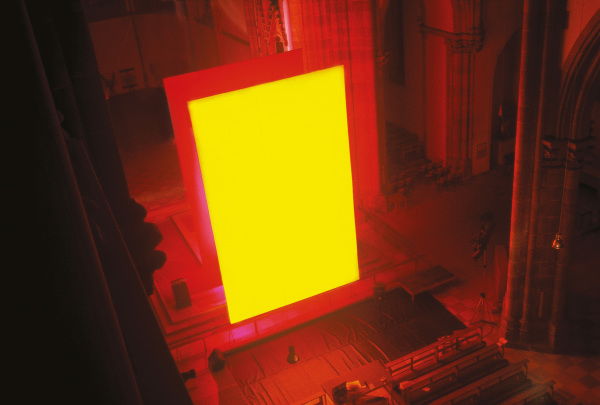 In view of the imminent change of years, the point of time: 12 o’clock midnight,

31st December 1999, subjectively became a juncture. One could say it achieved an imaginary volume – in this work of art the imaginary was abstracted into a physical space.

of strong, chromatic light, mixed from orange and magenta to a bright red, pulsating

in the rhythm of the human heartbeat.

An east-west orientated street crossing the boulevard Ludwigstraße, where the central celebrations took place, was defined as the time-axis. Intense light, orange from one side, magenta from reverse, was projected through the translucent screens printed in red.

The same principle of direction (east-west) and its interpretation of time can be found in the architecture of an occidental basilica, which made the church appropriate as the second site where the work was installed. 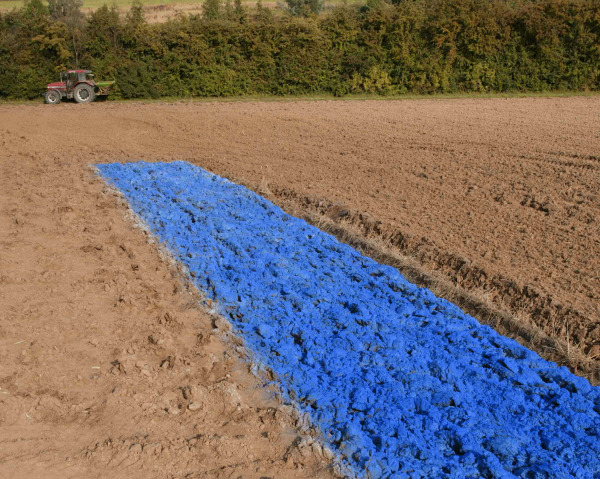 The fresh plowed soil was left for a while for subsidence and then sprayed completely with a mixture of calcium hydroxide, white marble dust and water in several layers – thin enough to led rainwater pass through but thick enough to be brilliant white. Because of this, the modeling of the surface by the plow can be stabilized against erosion, rain and hail up to a few weeks.

On the other hand, the chalk-layer works as a white gesso for the chromatic layer on top.

The gesso being still wet, a mineralic water-dilution is sprayed onto it – which binds with the gesso in the well-tried fresco-technique.

According to the number of gesso-layers, a “colourfield” like this can last between 1 and 10 weeks - all components are ecological and can be left as a mineral-dung at the acre. 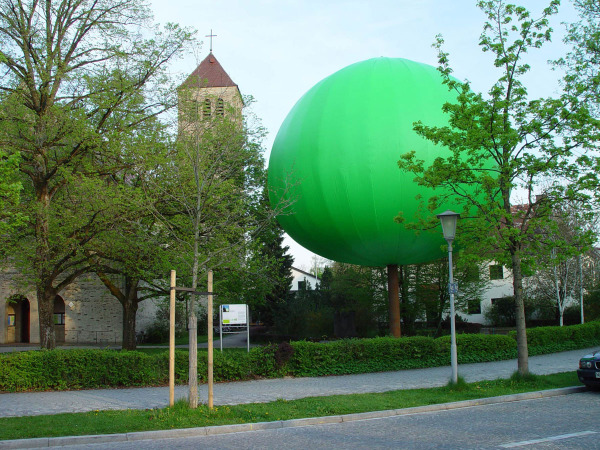 Although being suburban, Haar kept at the Kirchplatz its rural character, which induced to a contrasting as well as ironic concept.
The work of art refers to a Germanic and Slavic tradition to grace the village center with a lime tree – a venue for various social and spiritual occasions.

The pseudo-botanical title of the sculpture, accompanied with the copyright symbol relegates to a current topic:
A controversial attitude of human being is issued, the pretentious intervention into nature, like the appliance of genetic technology. It is shown that between ecology and profit there is a tightrope walk, between fascination and haughtiness to believe the human civilization is able to control evolution.
Hardly nowhere the contradiction is shown up more than in the artificial piece of nature which is created by the human. An arguable attempt to demonstrate human volition of integration. 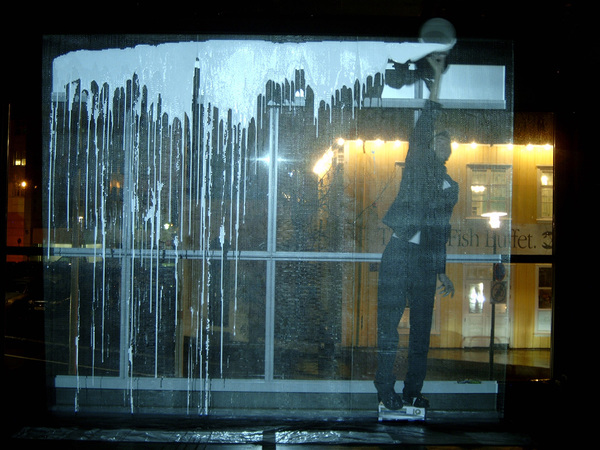 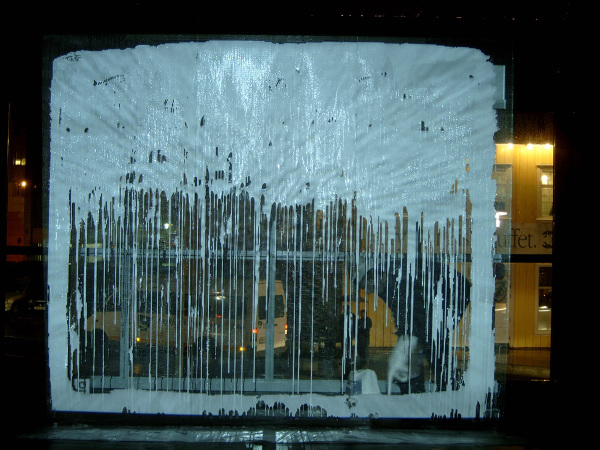 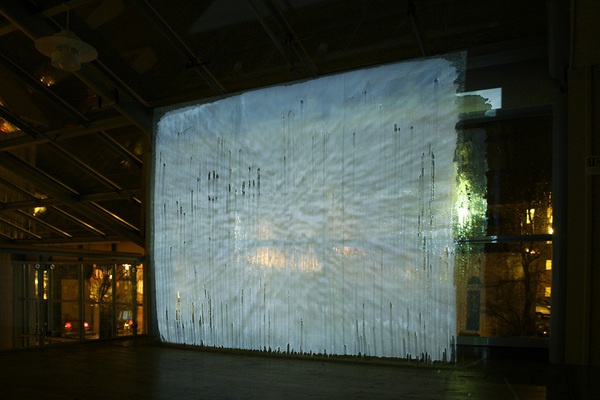 On site a large format of transparent steel mesh is installed freely suspended in space.

During a performance of painting a white coloured shape of a monitor, the video modine (New York 2004, 1:26 min, loop) was projected towards, where the completed monitor screen would be positioned.

The video, more and more mapped on the milky painting during its genesis, simulates 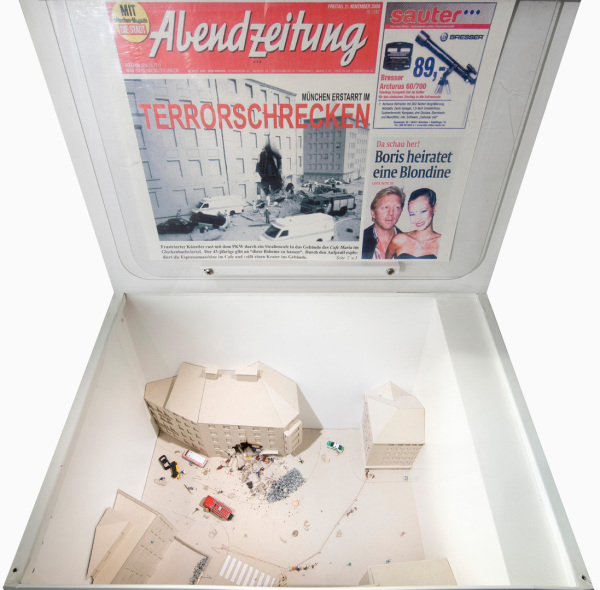 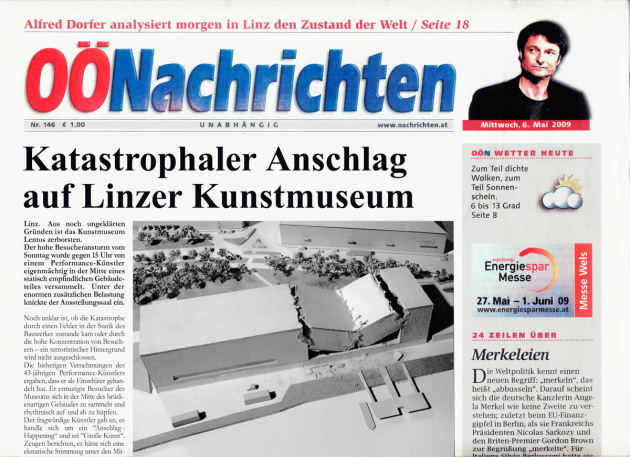 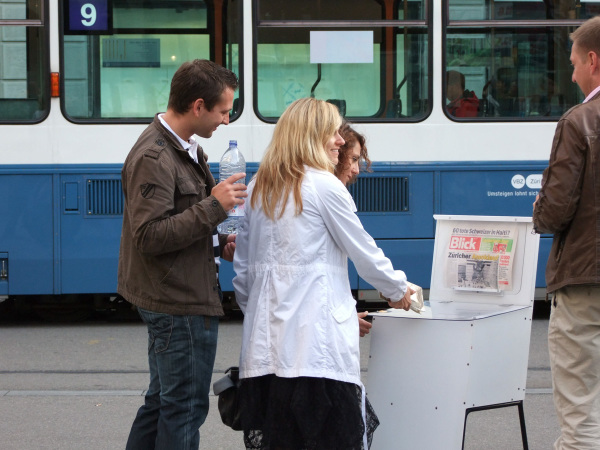 “frustrated artist speeds with car through pavement café into the building of Café Maria in the Glocken-bachviertel. The 43-year old admits to “hate this bohemian”. Because of the bounce the espresso machine in the café explodes and drags a crater into the building.”
Stories like this were developed for each front page of a local yellow press newspaper of each site in combination with a spectacular headline.
In Linz the curator Uwe Jonas commissioned the second suicide attack.
The assassinations took place purely in a cardboard model of the site, fit into the dummy salesman.
A photograph of the model used as cover picture appears in the first glance like an authentic press photo.
The dummy salesmen were placed on several days at various spots near the sites of the assassinations in the three cities.

Mechanisms of media-society and the relativity of perception of realness are reflected as well as the own potential for brute aggression and self-destruction as an instrument for manifestation of own ideologies – as an escape from anonymity and for a compelled participation in the medial delusion of self-expression.

project for the Künstlerhaus Ahrenshoop 2014 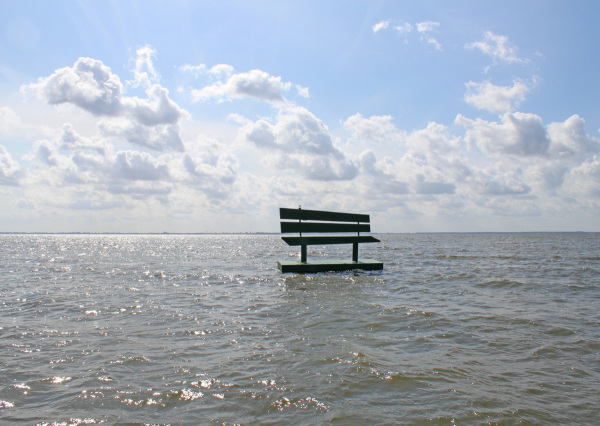 In the lagoon Saaler Bodden offshore Ahrenshoop in August 2014, a sculpture has been moored for one week – close enough at the haven of Althagen for details to be visible to the naked eye, far enough for swimmers to pose a challenge.

The construction of a coulisse has been built on a swimming pontoon out of polystyrene, like it is made for film productions.

The coulisse shows a park-bench larger than life, perspectively and relief-like distorted to a two-dimensional object. Colour: park-bench-green.

With this concept GÆG again targets on the misplacement with regard to contents of a multilayered charged subject. In the absurd context new directions of thought are evolving like “particularly peaceful place” or “offshore banking”.

In nighttime a marker light and four solar-powered spotlights illuminated the object.

A series of photographs was generated as well as a video work. 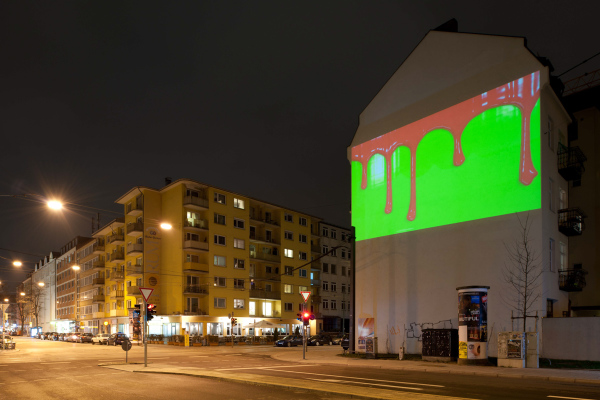 Five colours in a viscous, glossy quality float into each other during a 3:00 min loop. The entirely animated clip was shown over 3 weeks for several hours in public space and typifies the threshold of domination of computer generated quality of image before analog imagery. 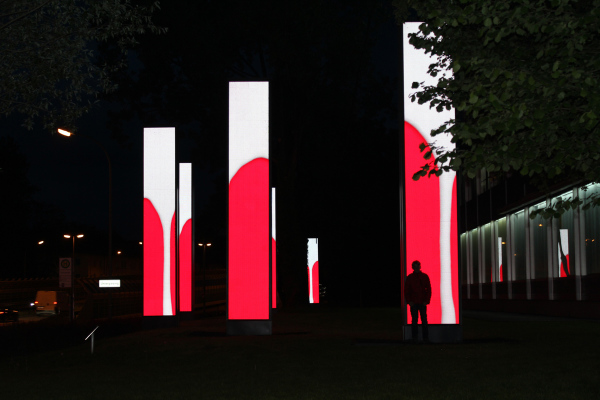 The installation narrates purely of white paint, which floats down from the top edge of the steles, viscously following gravity.

In detail a plastic aspect wins over – with reflections, light and shade, the descending, bulging and apparently wet film of gloss shows an impressive physicality – including the hence accruing sensual materiality of semi-fluid paint.

With a pixelated, flickering sequence finalizes the loop and unmasks the physical presence of paint as a digital animation.

Developed out of the concept of bunter abend, this work attends to the carination in visual perception from analogue (photographic) to digitally generated picture language. 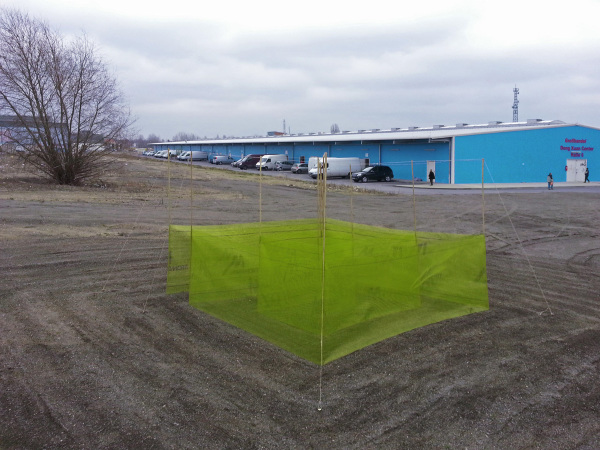 The ironic statement on the ultimate icon in land art: the spiral – honestly is the central aspect of the work, which happened on an industrial/ commercial, bleak site in the center of the urban quarter.

A series of photographs was generated as well as a video work. 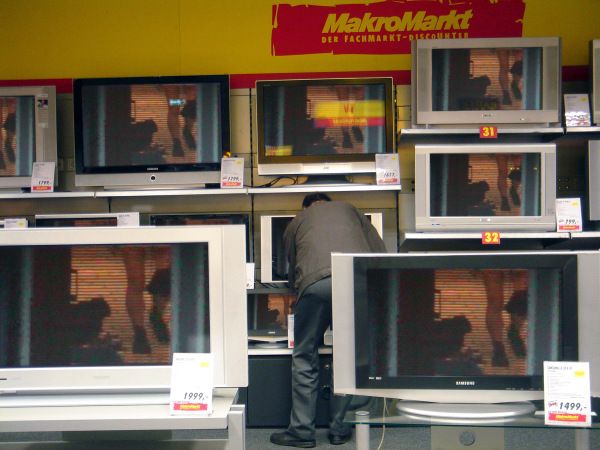 The observative video clips were produced in guerilla manner, like by a voyeur through windows of flats, lit inside in nighttime – during a residency in a residential tower from the balcony.

This broken taboo wanted to be compensated by showing a selection of the clips to the people of Gropiusstadt in public. Their local shopping mall seemed to be the perfect location for the presentation.

In particular the simulcast of the observing cameras on monitors above the shelves of the shop interiours, which is presented in some stores to the customers, therefore became exaggerated and ironised: the ‘vitreous customer’ seems to be observed in his private surrounding as well, even exposed bare.

Possibly not knowing what they are doing, still I am thankful to the shop-owners and branch managers who allowed my data in their display systems, as such critical perception usually cannot be found in our commercial world.

intervention in touristic structure of the region of Tux/ Austria,

100 leaflets were scattered in Hotels, Touristoffice etc. in the area, that never saw vulkanism! 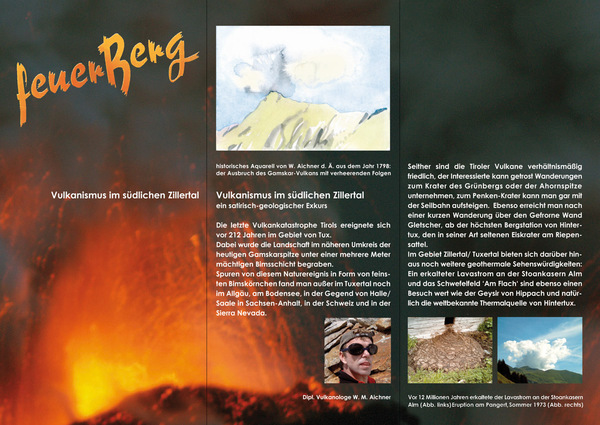